This was a busy week!  I actually only had one day of class because my Political Science class on Refugee Politics joined with the International Relations students for a three day trip to Geneva – four if you count traveling there last Sunday.  And of course I travelled again this weekend, but that was a much more relaxed trip.  But first, Switzerland.

After leaving Aix around 2, we eventually arrived in Geneva sometime after 9pm.  Our trains were on time, and there wasn’t much wait for those, but the last leg of the trip was by bus from Bellegarde to Geneva.  With the “Gilets jaunes” (Yellow Vests, link to more information) protests still ongoing throughout France, travel can be problematic.  Some people had been waiting for a bus for hours, and it was a little harrowing to get on.  Fortunately the professors were able to talk to the driver and get permission for us to board as a group, so we ended up in Geneva a little later than expected but all together.  The tours of various international organizations started bright an early on Monday with an 8:30 am appointment at the U.S. Mission.  The goal of the Mission is to represent US interests at various international organizations, but there is no one relaying with the Swiss government (that’s in Bern).  We were able to learn more about careers in the Foreign Service and had a great Q&A with the representatives who spoke to us.  Pretty soon though, we were off again to the World Trade Organization (WTO).  For this one, we were seated in one of the rooms used for intra-country meetings, and we got to choose country names to represent us.  As in an actual meeting, we turned the signs up to speak, and it was a lot of fun.  We then went to visit the Environmental Network and to eat in their cafeteria.  This particular location is the local base for several groups headed by the UN but also by other organizations, and we were able to meet with several representatives to learn about the various environmental groups and their goals.  And then, at long last, it was time for fondue and bed. 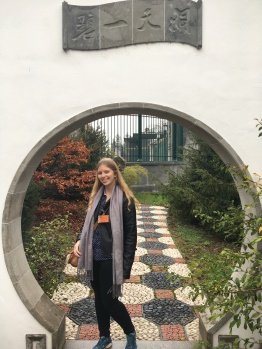 Tuesday morning, we were able to sleep in a bit before going to the International Committee of the Red Cross (ICRC), which is the international headquarters for all Red Cross/Red Crescent groups in the world. This was easily my favorite visit, and if I had to choose one of the places we visited to work at, it would be this one.  Besides learning more broadly about the work of the Red Cross, we also learned about aspects of its history.  The most interesting fact to me was regarding WWI in which all of the 44 main countries involved in the war (including colonies it was something like 100 countries) agreed to allow for communication between POWs and their families.  Everything regarding this went through the ICRC in Geneva: They had records of all POWs kept by the countries, and anyone could write a letter to the ICRC to gain information.  If you wanted to send a care package, you would send it to the ICRC, and they would get it where it needed to go.  They still have all the files, and it was pretty amazing to walk through those aisles.  We then had lunch at the ICRC and went across the street to the United Nations where we were given a tour and even got to look in on a meeting.  And for me, loving architecture, it was amazing to walk from the modern UN building to the League of Nations building, which is still used because the UN has a lot of committees that need meeting space.  Since we ended around four, I went with a couple of other girls to walk around the older part of Geneva before eventually heading back to do homework. 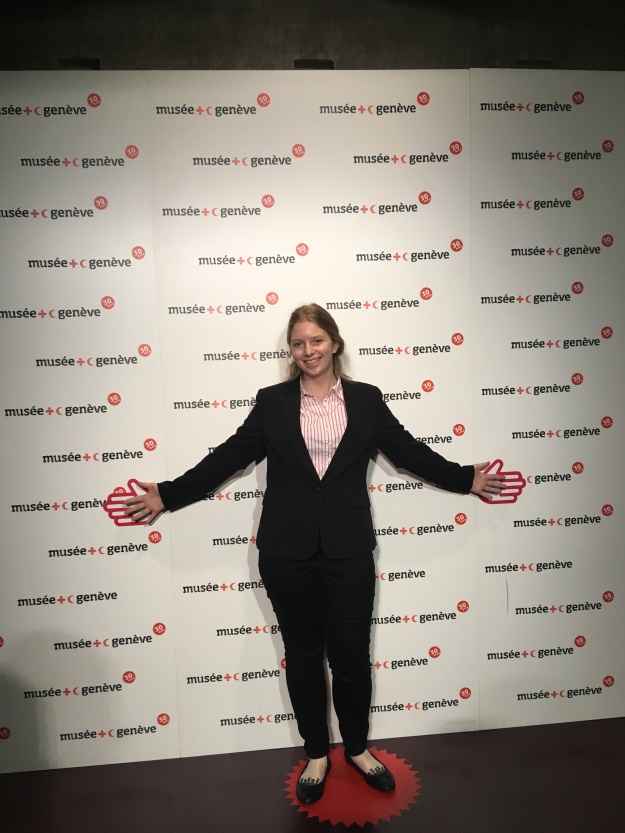 Fish and veggies (and a raspberry tart) 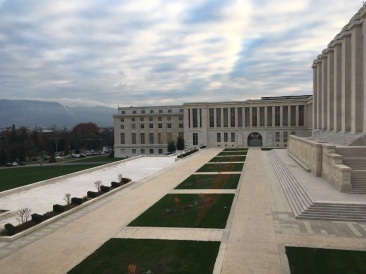 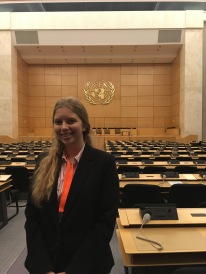 Our last day in Geneva was the shortest.  We had a visit with a representative from the International Organization for Migration (IOM) whom we kind of bombarded with questions.  It was a great session though, and after that we had the day free until we left.  For me, that meant another lunch at the ICRC cafeteria then some homework.  It was a great trip though, and I really didn’t get that much rest once I arrived back in Aix since on Thursday I went to a play at a local theater.  The show itself was kind of sad, but the theater was lovely and the acting was really good.  Then I was up bright and early on Friday to catch a bus to Grenoble. 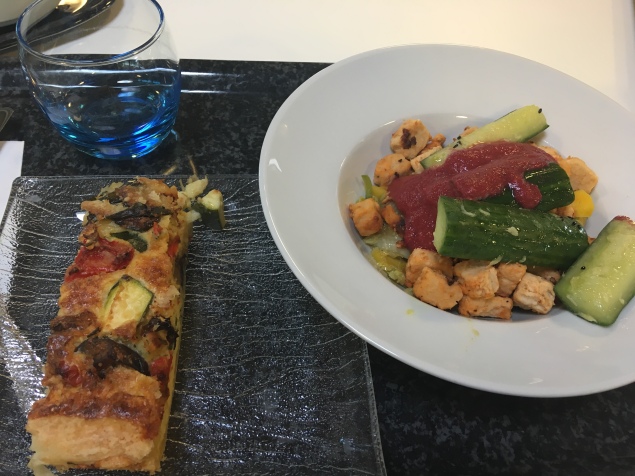 And a bonus ICRC pic

Grenoble is a French city in the Alps that also hosts a Christmas market.  And it’s a more convenient trip than Strasbourg, which has one of France’s most famous Christmas markets.  When I arrived in Genoble on Friday afternoon, it was very rainy and not expected to clear up until ten.  I walked around a bit and took pictures, but I ended up just enjoying my hotel where I finished my big essay and ordered bœuf bourguinon from the surprisingly affordable room service menu.  So not a bad night.

Empty square (because sane people are inside)

It was yesterday that I really explored the Christmas market, which was a lot of fun of course.  I sampled cheese and chocolate and…garlic flavored walnuts.  Those were definitely interesting, but not terrible.  The market was a lot of fun to wander through, and I of course love markets like that because they have cheap food, which I am all about.  When I wanted a place to sit down, I stopped by a waffle stand that had tables.  For three euros I got a waffle with unlimited toppings, so nutella, whipped cream, marshmallows, and chocolate drizzle.  Very sugary and very good!  And now, well, I only have one more blog to write here and the next will be coming from Charleston.  So it was a busy week, but it was a good way to finish up a lot of my traveling before finals and flying home.

There’s a waffle at the bottom of that

Walking back through Aix 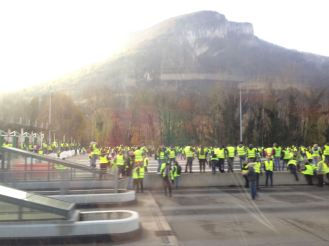 Some gilets jaunes on the way back from Grenoble