It’s hard to believe my time here is coming to an end.  But now that every city has up Christmas lights, and all the towns have their Christmas markets, it’s clear that the season is almost here.  However, when you attend school with Americans, there still has to be some celebration of Thanksgiving.  For one of my classes, we had been discussing a date to have dinner in Marseille with some refugees we’d been talking with during the semester, and one of the dates proposed was Thanksgiving.

So, at about 4:30, my class of fifteen and our professor arrived in Marseille and met up at the Association that was hosting us.  Almost immediately, however, our professor and the supervisor for the other students left to go pick up the main course.  With protests going on all over France, they weren’t sure how long it would take to travel there.  So for two hours, they left 25 twenty-somethings to set up tables, and make dessert.  Surprisingly, everything went pretty well.  The brownie batter had too much water, and the apple crisp got a little extra crispy, but it was a lot of fun.  As the clock ticked past 6:30 though, and we had no update on when our adult supervision would be back, people started getting a little hungry.  The desserts were ready, and it was widely agreed that the brownies were terrible, so those were distributed.  But most people wanted something a bit better, and the apple crumble wasn’t quite square.  I was in the middle of a conversation and kept looking over to the dessert table, wondering what was going on, and the next thing I knew, the edges of the apple crisp had been passed out in plastic cups for everyone to share until the main course finally arrived…right as I had to leave.

My study abroad program, CEA, had planned a Thanksgiving dinner for some time, and since I had already committed to that, I was allowed to leave Marseille early for a different dinner.  The dinner was, of course, amazing.  We ate at a restaurant where they prepared turkey, green beans, something like mashed potatoes (cauliflower?), and cranberry sauce for us.  One of the CEA leaders brought stuffing, and others affiliated with CEA brought a selection of pies.  It was all delicious.  I sat with a few people I knew, and as I usually do when with those people we started discussing religion and philosophy.  Although all the food was gone by 9:30, it was nearing 11 when I actually left, and they were still talking when I did.  All in all though, it was a great evening with good food and great conversation.

And with Thanksgiving over, it’s very clearly Christmas here.  Aix is one of many towns in Europe with an annual Christmas market where vendors set up on the main street selling food and various other products.  Aix also has some carnival rides for the kids, and even if you don’t buy anything, just walking down the Cours Mirabeau this season is a lot of fun.  In fact, that’s what I did Saturday morning.  My art history  class was supposed to have a trip to Nice, but due to the protests, the professor was worried we would be spend the day in traffic rather than at a museum.  So instead, we met at the Hotel Caumont here in Aix, which was also great since their student discount is not great, and I had figured I wouldn’t see the exhibit at all.  With the school  paying though, my entry was free, and I got to see a wonderful Chagall exhibit.  The museum itself is beautiful though since it was built in an 18th century mansion that includes its own garden in the middle of the city – obviously a well-to-do family built the place. 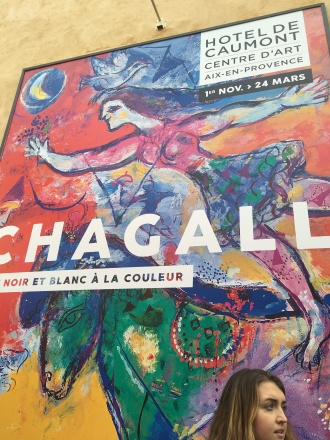 One of my favorite Chagall works 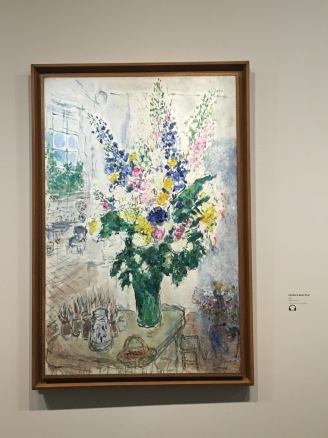 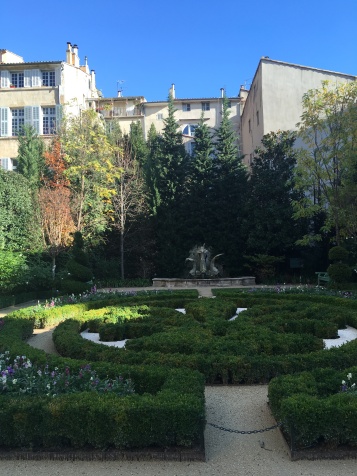 In the middle of downtown Aix

Since I didn’t have to pay for the entry to the museum, I treated myself to a stop at the café with another girl from class.  The café’s location is such that you can only get in if you have the museum ticket, so going another time would have meant a 10 euro entry fee in addition to whatever I bought at the rather expensive café.  Thanks to the French custom of not rushing people out of restaurants, we were able to sit there for at least an hour and a half, enjoying the weather and the gardens and just talking.  Afterwards, since we hadn’t bought any of the pastries, we stopped by a donut stand at the Christmas market when we finally left.  It was a great way to spend the afternoon, especially with the sunshine after a rainy week.  And now, off to Geneva!

Donut at the Christmas market 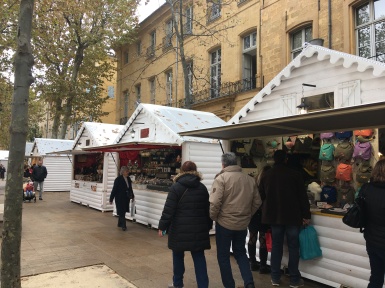