This weekend I visited one of the most beautiful cities in the world.  Friday morning I arrived in the Prague, the capital city of the Czech Republic.  The flight itself was beautiful, traveling over the Alps and looking over the acres of farmland in central Europe.  Around nine am, we touched down at Vaclav Havel Airport (named for the former president/author).  I was traveling with my roommate, and since this was a trip we knew we wanted to take, we planned ahead and coordinated with out Airbnb host to drop our bags off when we arrived rather than waiting until afternoon to check in.  That done, we set off to find some coffee because Prague is much colder than southern France.

The currency in the Czech Republic is the crown (or koruna in Czech), and the low exchange rate is very friendly to travelers…so I ate a lot of food.  Post-cappuccino and strudel, my number one place to visit was the Baroque library.  Established in 1722 the Klementinum was the first public library in the country and is home to 20,000 volumes of theological texts from the 17th and 18th centuries.   In the same building, astronomers did much of their work including tracking time with the use of a meridian line and a camera obscura  (an actual explantion).  Until the 1920s they still worked from the tower to examine the stars and both  Tycho Brahe and Johannes Kepler lived in the city during the rule of Rudolf II.  Of course, one can’t discuss astronomy in Prague without mentioning the magnificent Astronomical Clock.  Built in the middle ages, the clock still works, which is good since legend says that the fate of the city is entwined with that of the clock.

From the Astronomical tower

One of the other key features of the city is of course the Vltava River.  The city is connected by 16 bridges across the Vltava, and its art deco façades line both sides of the water.  Not wanting to brave the crowds at Prague Castle at their peak, we spent Friday walking down the river to the Neo-Gothic Basilica of Peter and Paul which is built on the grounds of Vyšehrad, the 10th century fortress said to be the first settlement of the city.  Besides the basilica, it also contains the Romanesque Rotunda of St. Martin and Vyšehrad Cemetary.  The only historical figure I knew of there was the artist Alphonse Mucha, but the statues lining the cemetery are marvelous works of art themselves – and I learned that rodina is not actually the most popular Czech name but the Czech word for family.  After a bit more walking, we had dinner at a wonderful Czech place called Lokal that I would highly recommend (though I would also recommend a reservation). 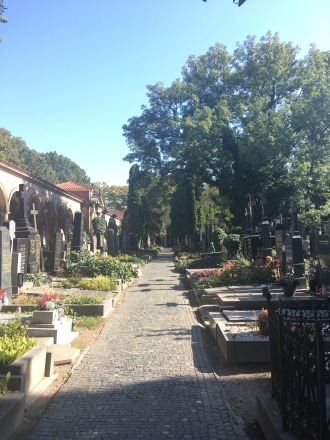 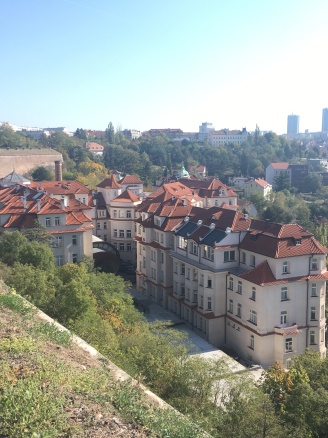 Looking over the city 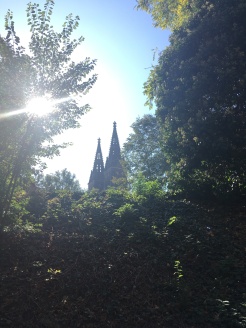 Spires of the basilica

Saturday our goal was to see the left bank of the river including Prague Castle and some other sites of the “Lesser Town.”  We left the apartment at eight, planning to arrive around nine when the castle opens.  After an unexpected detour, we decided we’d missed the über-early entry anyway and took our time posing for pictures on the Charles Bridge and drinking hot chocolate at a café.  The Charles Bridge is one of Prague’s most famous sites.  Construction on the bridge started (big surprise) under Charles IV in the 14th century though it took about fifty years to complete.  Though it is now one of many, until 1841 the Charles Bridge was the only connection between the east and west of the city and quickly became an important trade route in Europe since the Vltava is not a small river.  The bridge is also famously lined with Baroque statues, though these were added in the 1700s after the original Gothic art was destroyed in the Thirty Years’ War.  Today the bridge is still holding strong, which would please King Charles because, as a big believer in numerology, he insisted that the first stone be lain at precisely 5:31 am on 9 July, 1357 or numerically 1357, 9, 7, 531 – a palindrome. 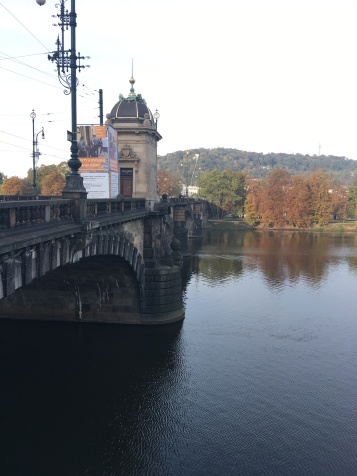 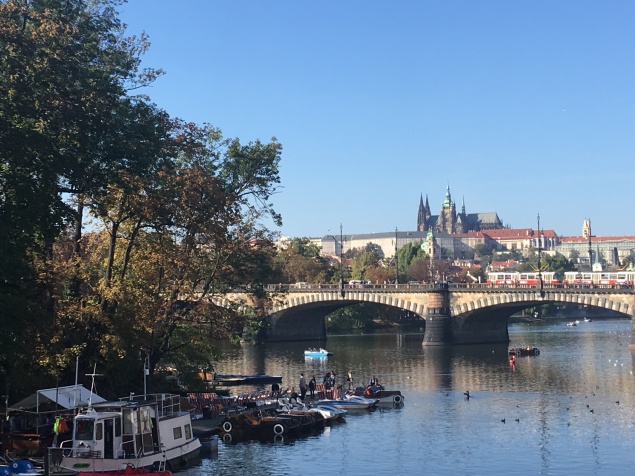 Looking up to Prague Castle

On the Charles Bridge

Prague Castle is though the most famous landmark of the city – or, more precisely, St. Vitus Cathedral since those are the spires one actually sees from the rest of the city.  The exterior façades of the castle look fairly modern compared to what one might expect, but the extensive complex is actually home to several varied architectural styles, and the interiors of the different buildings are an amazing testimony to this building with over a thousand years of history.  It is still the official home of the president today, and many famous people have stayed within its walls including author Franz Kafka.  With two incidents of defenestrations, a cathedral to the patron saint of dancers, and the gory  story of Operation Anthropoid, Prague Castle has a fascinatingly detailed history, and I loved being able to walk the grounds for a few hours.

View looking up the lookout tower

Entry with titans and guards 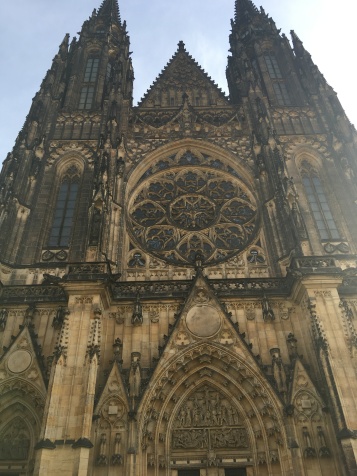 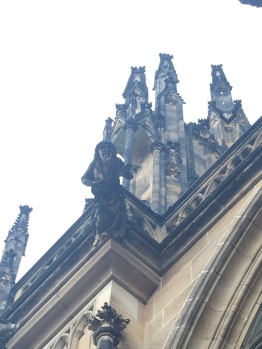 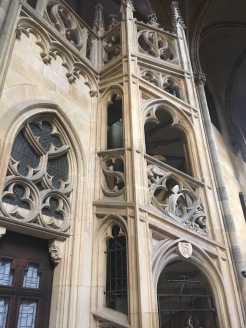 Looking back down the nave 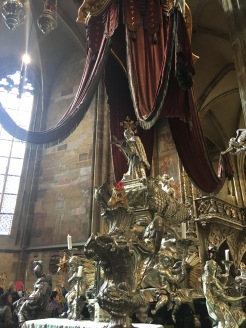 Tomb of St. John of Nepomuk 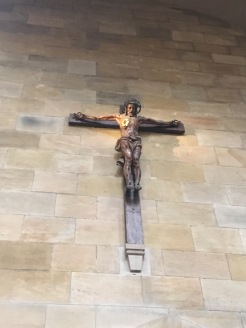 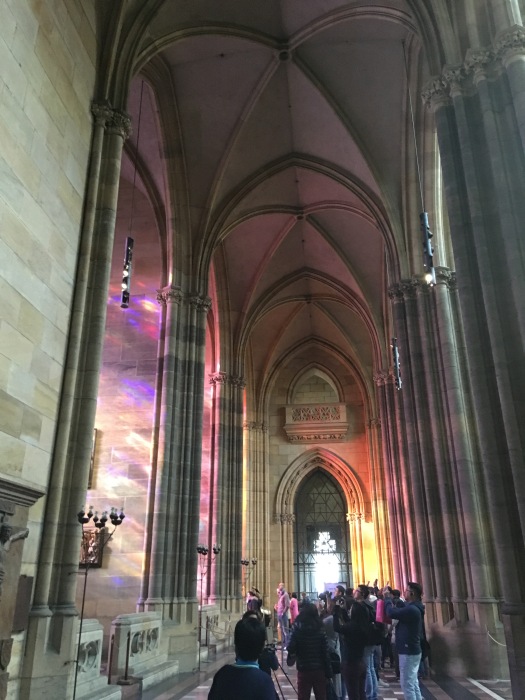 Light through the windows

Posing in the cathedral 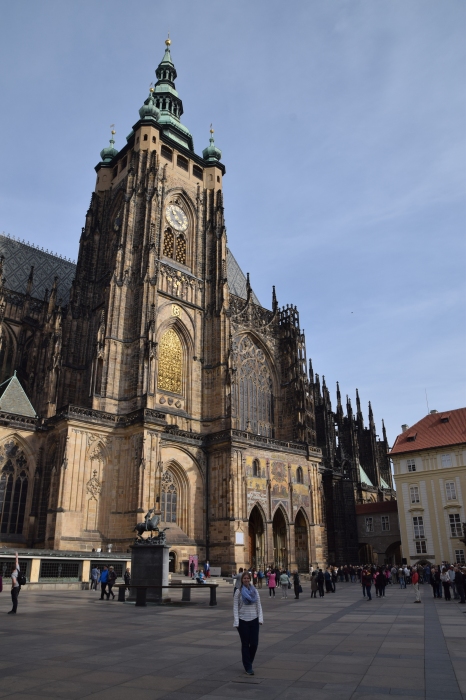 …with me for scale 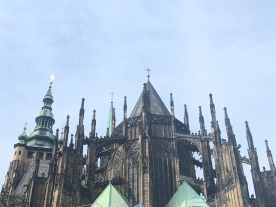 From the collection of Prague’s historic armor and weapons

Armor through the ages

Looking into the city

Once you’ve climbed the 208 stairs to the Castle, you may as well keep going up, so after a break for lunch, we set off for Petrín Lookout Tower, built in 1891 and inspired by the Eiffel Tower as a way to overlook the city.   Not wanting to take the funicular, we climbed about a hundred or so steps up the hill to reach the base of the tower.  The fee to climb up is about two dollars for students and includes…more stairs!  To be exact, it is 299 stairs to the top of the tower, but on a clear day you can not only see all of Prague but most of the Bohemia region.  I was exhausted, but it was worth it – and going down all the stairs was nice.  As it was still early afternoon, we decided to hit a couple more places in the Lesser Town, and our first stop was the Lennon Wall – a technicolor painted wall that is an homage to John Lennon…though I was perhaps more excited about the gingerbread store we passed on the way there.  Our next destination was the small park of Kampa where we spent about an hour watching the swans on the river.  We even came back after dinner to see the Charles Bridge lit up at night from a distance.

Futher above the city 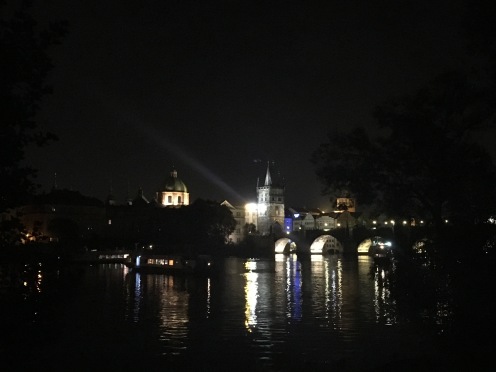 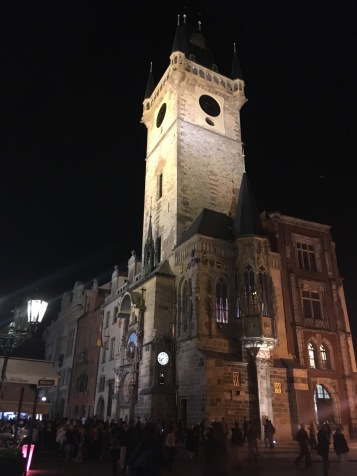 Statues on the Charles Bridge

Sunday morning started with Starbucks in Wenceslas Square.  This is the modern part of the city, and it’s mostly  a high-end shopping district.  Since we were interested in statues, it made since to go before the stores opened and just take some pictures and drink something warm.  Following that, we went back a few centuries to the Jewish Quarter.  Originally, this was just a very small bit of the city that Prince Hostivít granted to a community of Jews evicted from Russia in the 9th century.  Over the centuries, the town grew and became important to the city.  Though the Jewish population is much smaller today and also not limited to the one neighborhood, the area still retains much of its history.  Entry to the famous synagogues, museums, and cemetery adds up, so we made it into a cheaper trip by just going on a scavenger hunt to find all six synagogues in the quarter.  And stopping for kosher trednelik. 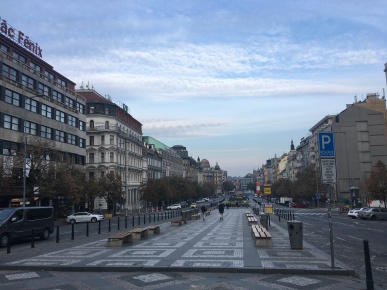 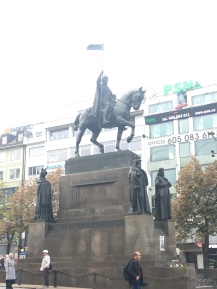 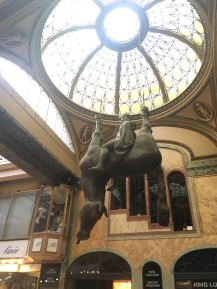 Upside down horse because why not 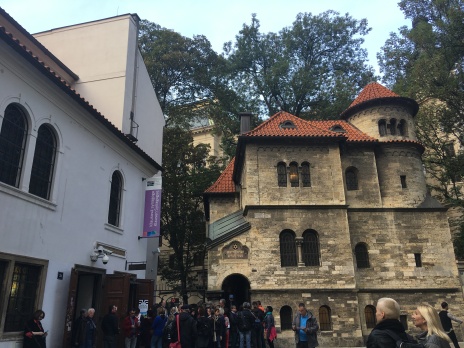 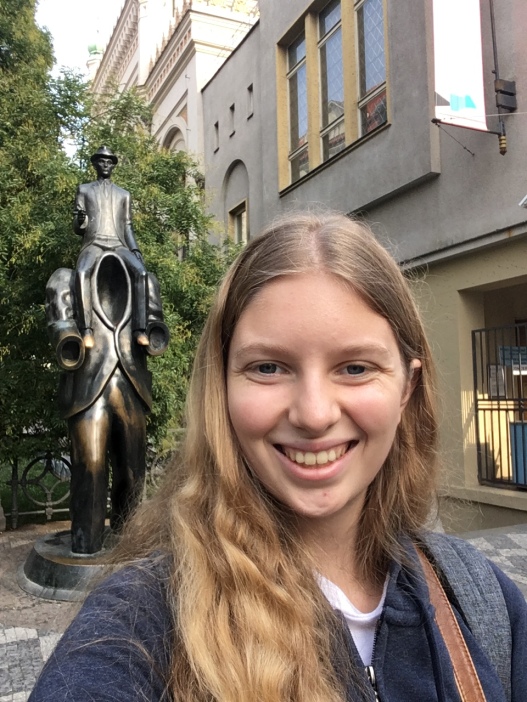 Franz Kafka statue (he was born in the Jewish Quarter)

Finally, with only a couple hours before our flight, we’d seen all the main points of the city but still wanted to spend a bit more time enjoying this amazing place.  There’s an  extensive park on the hill looking over the Vltava that’s adjacent to the Prague suburbs.  Known as Letenské Sady, it has trails for hiking or cycling, a small museum, and even a skating park.  The most famous building in the park is the Hanavsky Pavillion, built in the Neo-Baroque style of 1891.  It commands a spectacular view over the city, and we had a wonderful picnic sitting on the benches outside where we could overlook the Vltava and the City of a Hundred Spires.   Being in Prague was absolutely amazing, and I look forward to going back. 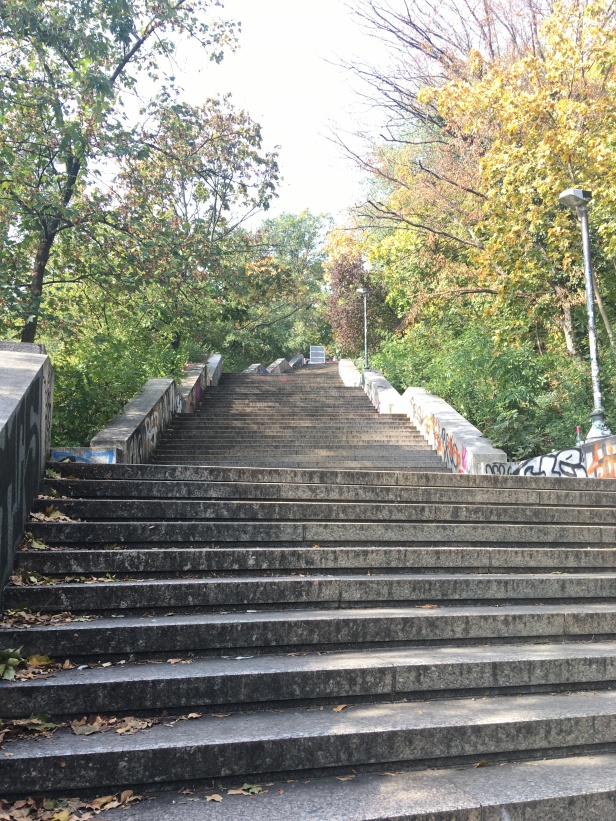 Loving my last minutes in the city

Looking down to the Vltava