After two intense weeks of traveling around Italy, it’s nice to work on this post on a train taking me back to  Orvieto after a weekend at the beach.  Cinque Terre is home to five tiny cities of about 1000 inhabitants each.  The tourists crowd it in the summer, but it’s still a lovely little collection of colorful houses and blue waves.

But I’m not there yet.  On Wednesday, the group took a day trip to Siena, a town that’s kind of a modern remnant of the Middle Ages.  In the main part of the city, the buildings were all built in the 13th or 14th century and have stayed in the same places since then – with renovations of course.  The town was originally divided into seventeen sections, which means seventeen churches, seventeen bureaucracies, and seventeen horses. Yes, horses.  Besides its cathedral, Siena is most famous for the 90 second race that takes place every July.  Each district participates, and a horse can win even if the rider is thrown.  While we didn’t get to see that, we did see Piazza del Campo where the race takes place just as it has for centuries.

The cathedral in Siena is  absolutely spectacular.   It was built  at  the  same time Florence was  building its cathedral, and the two cities were actually in competition for who could build the best one.  At one point, construction on Siena’s cathedral stopped because they realized the Florence one would be bigger and started making a different one.  All that was built of this was one arch of the façade.  Had the cathedral been built, it would have been a skyscraper, but in my  opinion, it’s almost better that they only built the one arch.  Now, Siena’s original cathedral has the spotlight, and one hundred tiny spiral stairs up the arch take you to the best view in the city.  Siena’s clocktower may be higher, but it’s also four hundred stairs to the top (they built the clocktower from the lowest point in the city).

The cathedral in Siena is a Gothic masterpiece, and, like much of the rest of the town, is kind  of like Medieval Europe with  modern tourists.  Although the outside is beautiful, the real wealth and fame of the cathedral come from its interior.  Siena has the luck of being close to a lot of marble.  While white marble is the most common, it’s actually yellow that is rarest and most expensive.  The floors of Siena’s cathedral feature marble tiles in white, green, red, and yellow that depict Biblical scenes.  These would have been used similarly to stained glass windows in illustrating the priest’s sermon, since almost all of the congregation would have been illiterate.  My favorite part of the cathedral though was inside a chapel.  Originally, a noble family who donated a lot of money to building the cathedral had this chapel for their private use, but now it’s used to house vellum choir books, under glass  of course.  I took some  pictures, but they really can’t  capture how cool these books were.  All of them were illuminated, and they were much  bigger than modern choir books since they would have been really expensive, and there was no way the church could afford one for each choir member.  So, all in all, Siena is pretty neat.

Duomo di Siena from a distance 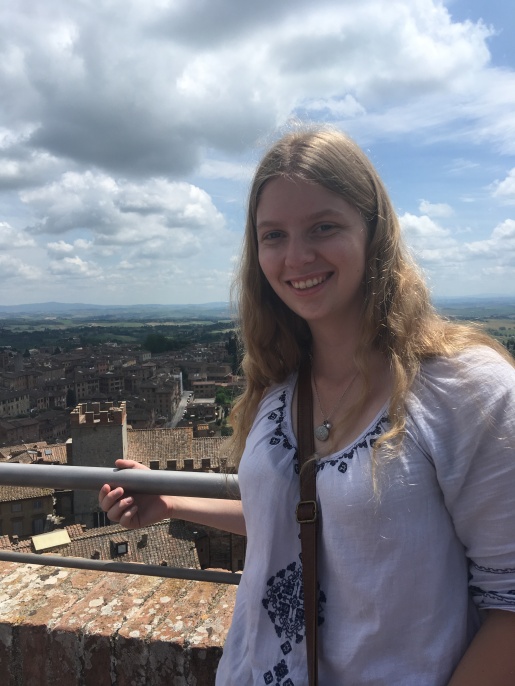 Looking across the city

Arch that would have been façade for bigger cathedral

However, as much fun as I’ve been having, the long free weekend with minimal pre-planning was pretty nice.  Some people had pretty intense travel plans – 3 countries in 3 days, trips to Ireland or to Hungary.  While  those all sound pretty cool to me, I really didn’t want to deal with flights or big cities, so one of my roommates and I headed north to Cinque Terre.

We left early-ish on Friday morning (around 9) and took the first train to Florence along with a couple of guys who were going to Milan.  Early in the trip, I discovered that I hadn’t charged my kindle, so rather than digging the charger out o f my backpack, I listened to podcasts and watched the countryside go by.   Once in Florence, we split with the guys and  took our train to La Spezia, the biggest town before Cinque Terre.  Once we were settled into the airbnb (a cute little flat on the first floor of an apartment building), we chose one of the five towns at random and hopped on the next train.

Vernazza may have been a random choice, but it’s easily my favorite.  We arrived there around 5:30 and left at 10:30.  Naturally, our first stop was the water.  Vernazza isn’t known for its beach, but we weren’t dressed for the water anyway.  Instead, we walked out along the sidewalk to smell the salt and take some pictures – and I also got splashed by some very cold spray from the waves.  We wandered through some of the stores then hiked up a lot of stairs to this tower that overlooks the area.  It was great weather and a great view, and by the time  we came down, it was an acceptable time for dinner.   As this was considered out vacation, we treated ourselves to some seafood pasta: Shrimp ravioli for me, and for my roommate, spaghetti with mussels and clams.  Both were fantastic.  Finally, we went back to the bay to eat gelato and watch the sunset before returning to La  Spezia for the night. 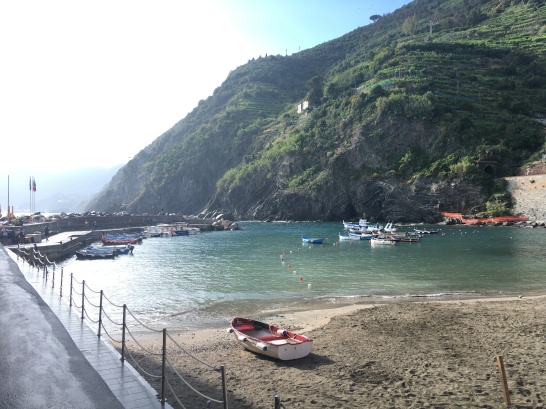 Stairs up to the overlook 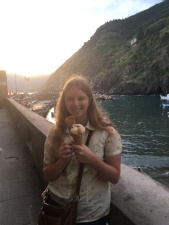 Saturday was our main day in the region, and we made the most of our day pass that allowed us unlimited train rides between the towns.  We started with Riomaggiore for breakfast and hiking out over the rocks that this first city is known for.  Next was my second favorite – Manarola where I did some light shopping before we walked on a trail out to the cliff where we had lunch.  Next was Corniglia.  This one is probably the smallest and least visited.  We weren’t there very long because after climbing about two hundred steps up to  the city, it was mostly just restaurants. We skipped Vernazza since we’d already been there and went instead to Monterosso, which is the town known for its beach.  Since we’d already walked about five miles at this point, I changed into my swimsuit and fell asleep on the beach.  It had been overcast all morning, so the water was a little too cold for swimming.  When we eventually left,  we went back to Vernazza to kill some time before dinner in Riomaggiore.  For dessert, I didn’t have gelato  for once since they were advertising fish and chips.  I figured I probably wouldn’t get fresh fish and chips for a while so, topped with lemon, mayonnaise, and ketchup, I had a pretty nice dessert.  Back in La Spezia, my phone read a total of nine miles of walking,  so I slept pretty good.

This is the rocky city

Towards the boat launch 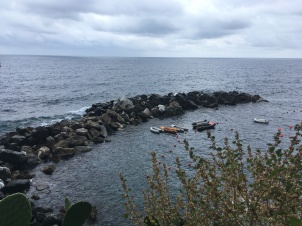 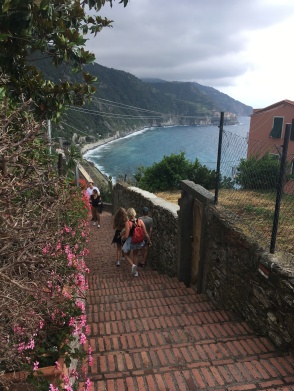 Looking down from Corniglia 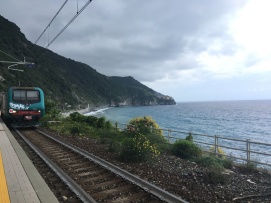 It was a good weekend

Today is pretty much devoted to getting back to Orvieto and reading for class since we had no WiFi for the last two days, and I didn’t download the articles.  It was a little stressful getting onto the train since the first one was running it late.  We had to change trains in Pisa and arrived there at 12:30 with our next train scheduled to depart at 12:32.  By some miracle, we actually made it on just before the doors closed and got seats.  So, now that I no longer have short layover to stress over, I intend to spend the rest of the train ride watching Tuscany go by outside the window.

Where am I now?

I had a fantastic break but it’s also great to be back in Tucson! Here’s to a new semester and new adventures!
So happy I got to see snow before going back to Tucson!!! Plus a couple of other scenic pictures from the last week
Home for the holidays!
Beautiful day at Madera Canyon
I’ve got to say, this was a pretty good night
The Tucson version of fall colors