I knew spring was here when I walked out of my dorm and found myself enveloped in the scent of the orange blossoms on the trees around the buildings.  Every where you walk on campus now, there are flowers blooming.  Although the greenery never really left for the winter, now everything is in bloom, and it’s like a constant reminder that after spring comes summer.  I found out a little over a week ago that I’ve been accepted to the Arizona in Orvieto program and will be spending a month of my summer in Italy  to study art history, so that’s some exciting news!

Since the last time I wrote, spring break has come and gone, which means I’ve done a lot.  For example, just before break, I had the opportunity to tour the Tree Ring Laboratory on campus.  The history of this lab is actually really interesting, since its founder is considered the pioneer of Dendrochronology  (Tree Ring Dating).  As a friend of the astronomer Percival Lowell, Andrew Elliot Douglass initially thought that tree rings could help explain the eleven-year sunspot cycle.  He was wrong, but the establishment of the Tree Ring Laboratory has led to discoveries of a lot of things trees can tell us.  The scientists here have worked with researchers around the world to date objects and learn about the environment.   It was a really incredible tour, and I definitely recommend a visit to the lab because even if you aren’t interested in the history of forest fires, you may be intrigued by the remains of an Ottoman Empire bridge that was constructed in Turkey from Moroccan wood (because they can actually tell you where a random piece of wood came from).

Although I’ve been in Tucson for almost a year now, I haven’t seen a lot of the things in the city, so it was fun over break to go to Reid Park Zoo and see the lions and tigers and bear.  My favorite part though was definitely the bull elephants who got into a bit of a tussle over a branch while we watched.  They also have Red Pandas and some incredible aviaries for bird enthusiasts like me.  Be warned though –  there are at least a dozen peacocks, and they kind of just go where they want. 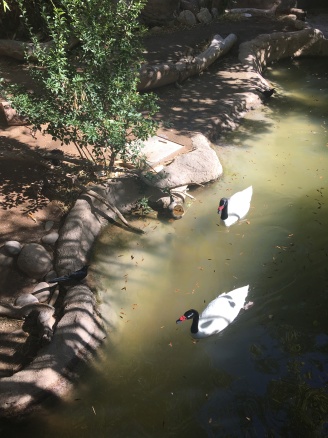 The only non-screeching breed of swan 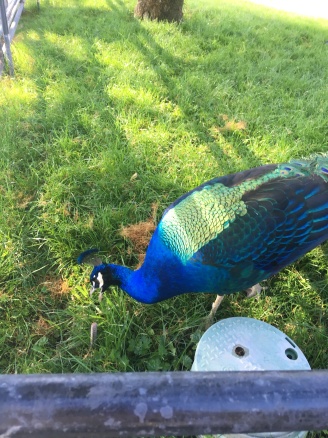 I also went to three museums.  I had been to the UA Museum of Art, but they had some new exhibits from the last time I went, and I never get tired of looking at the old paintings in which Baby Jesus doesn’t look like any baby I’ve ever seen in real life.  I had also toured the Arizona State Museum, but the Paths of Life exhibit on the history of Native Americans in Arizona is packed with information.   Also I get into both of those for free as a student, so that’s another reason they’re great.  Finally, I went to the Arizona History Museum, which first of all is much bigger on the inside than it looks from the street.  This museum started with Native Americans, progressed to early settlers and then went into a huge exhibit about mining that included a realistically shadowy and creepy set of the inside of a mine and a life size contraption that processed the ore.  Because all this wasn’t enough to fill the deceptively small building, there was also an exhibit on 1870s Tucson with an interactive second level for kids to see the kinds of houses lived in by the various kinds of families in the city.  Beyond that, you move into the transportation part of the museum that features glassy-eyed horses, oxen, and a Model T.  Finally, there is a room with  pictures of the city’s history, and  you return to the lobby.

Overall, spring break was very  relaxing and a lot of fun with a culmination in the annual Tucson Festival of Books in which the white tents that have been covering the campus for weeks were put to use by thousands of people buying books, attending lectures, receiving flyers, and eating fair food.  An important note: Fair food in Tucson is not limited to cotton candy and overpriced cheese fries, it also includes churros and slightly overpriced tamales that are still worth it because they’re delicious.  I had the opportunity to attend a talk by actress Jenna Fischer, best known for her role on The Office. Studying at the library last Sunday was also fun because the Tohono O’odham pavilion outside the library was putting on a small concert while I studied.

School’s back in session now, but the advantage of the second half of the semester is that you have more long-term assignments and  less day-to-day homework.  So although I’m spending about the same amount of time on homework, the stress is a little less since if I need to, I can delay French to practice for my guitar midterm (which is what I’ve done this weekend).  I also got to see The King and I performed on campus, which was kind of the main reason I bought season tickets for these Off-Broadway shows, and it did not disappoint!  I love the musical and already knew the songs, but seeing it live was spectacular!   The semester feels like it’s flying by, but I’m loving the flowers and the stuff I’m learning.  I don’t want my classes to end, but I also can’t wait for summer. 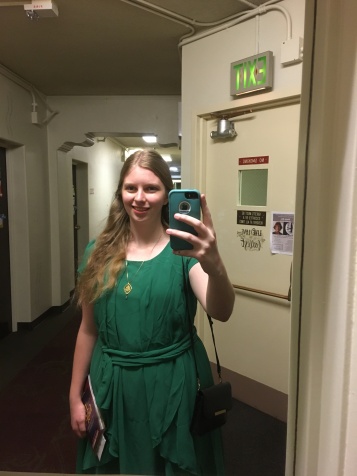 Ready for the show