Two weeks later, and I’ve not only seen a lot of Arizona, I’ve also finished another first week of class.  But first, the trip.  Before entering Arizona, we stopped in New Mexico to see El Malpais and El Morro – some of my favorites from the whole trip.  El Morro translates to “The Headland,” which is an apt name for this mesa that dominates the landscape around it.  Since pre-historic times people have seen this cliff face as something awesome and have carved into it.  Walking along the trail, you can see not only petroglyphs, but evidence of Spanish explorers, American soldiers, and New Deal workers who carved the staircase that leads to the top.  The Spanish phrase “pasó por aquí” (passed by here) that is written so many times on this rock is, to me, a mark of how people have always wanted to note their passage through the world, like I am on this blog.

In Arizona, we passed by many other places that have been held in equal esteem for the last few centuries.  From the beautiful Painted Desert that is the entrance to the Petrified Forest to the Grand Canyon and Casa Grande, it’s remarkable to see how generations of people have shaped this land and called it home.  Driving through a state known for its desert, you wouldn’t expect mountains, trees, and fields, but they’re all here under a beautiful Arizona sky.  The names of these places make them seem like they’re from another world (i.e. Montezuma’s Castle, which is neither a castle nor anywhere close to Montezuma’s empire).  However, I really liked this trip for the chance to see how people have lived and thrived in this apparently inhospitable land for so long.  That phrase “pasó por aquí” certainly has a deeper meaning when you can go to Casa Grande.  People made in this huge settlement nearly six centuries ago, and their descendants still live in Arizona today!

And last Monday, I continued my own passage in this place as I moved into my dorm for the three weeks of UAdvantage.  I haven’t unpacked much since I’ll be moving again soon, so this place really just feels temporary.  In fact, by the time I post again, I’ll be packing everything up to move again!

The classes themselves have been a lot of fun this first week, particularly the “field trip” across campus to the Arizona State Museum.  As the first part of the Anthropology class has focused on Native Americans in Arizona, the museum’s primary exhibit was relevant.  As a description can’t really capture how cool this exhibit is to walk through, I would first recommend coming out to visit, but for those who can’t, let me just say that this was a really well-done exhibit.  Not only does it have interactive portions and awesome artifacts, it was also designed with the help and permission of the tribes whom it discusses.  By far my favorite part, however, was the life-size diorama that depicted a scene from a story told to you via recording.

As for my first weekend here, I would deem the Lord of the Rings marathon a rousing success.  I think the remainder of my time in UAdvantage will go just as well as this first week, and I can’t wait for the fall semester to start afterwards.  I’ve kept up with Arabic online, so I’ll be ready for that class when it starts too.  It’s exciting to be starting college so soon, as these summer sessions really haven’t been too different from past summers abroad.  Thinking about staying here is exciting, and I welcome the thought that I too will be able to say I passed by here.

We had to model here 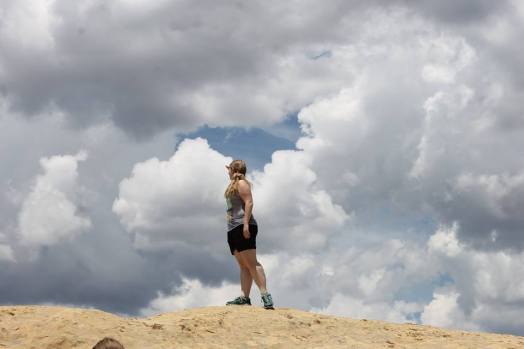 A reference to my Lord of the Rings weekend – “Legolas, what do your elf eyes see?”

Did I mention we went camping here?

Pasó por aquí (you can sort of make it out)

Sisters at the Painted Desert 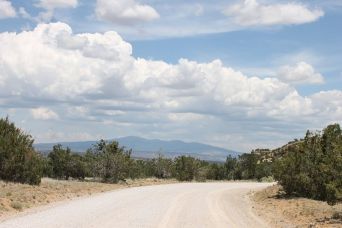 Introducing her to great literature at Denny’s 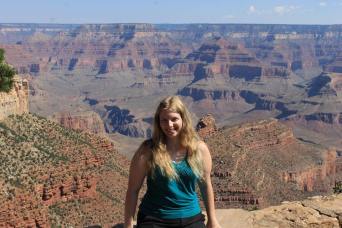 Me at the Grand Canyon

With Kayley, above the canyon