Three weeks into Arabic class, I can now say a decent amount in the language; however, I doubt a list of vocabulary words is what you want to read.  In that vein, I’ll talk a bit more about the cultural activities and exploring Tucson.  I’ve been learning a lot here though, and the class is awesome, which leads me to the quote that lends itself to the title – “Education is the passport to the future, for tomorrow belongs to those who prepare for it today” (Malcolm X).  Since Arabic is a huge part of what I want to do in college and beyond, that phrase seemed apt.

The cultural activities in the class are varied.  The first Friday, for example, was calligraphy.  Last week, we learned some about games from Arab countries and watched an Egyptian movie.  This past week, we had henna and Dabkeh, a traditional dance from the Levant.  Like most dances, I’ve tried to learn, I did not excel at this, but it was fun.

I was also able to go to 4th Avenue last weekend, which is home to any number of cool shops.  No huge companies are allowed to own stores on that street, so all the little boutiques and bookstores are original and really cool.  In one of these shops, for example, I bought a tunic to wear to the mosque.

As Ramadan was going on for the first three weeks of the class, and we were studying Arabic, the department was able to organize two outings for us related to this.  For the first, we went to the nearby mosque for Iftar – the time after sundown when people in the Muslim community can break their fast during Ramadan.  It was like being at a big family reunion to me.  People talked to their friends; kids ran everywhere; there was REALLY good food.

The last day of Ramadan was this past Saturday.  This is celebrated with the Eid-al-Fitr, which is basically a celebration that started Saturday at sundown and will last until Tuesday at sundown.  Here in Tucson, it was celebrated with a service at the TCC (Tuscon Convention Center) yesterday morning.  The sheikh who spoke was actually from Egypt and had been invited to spend the month of Ramadan here in Tucson.  It was so cool to be able to witness this event and learn more about Ramadan.  I also did not mind the free candy and cookies.

Since today is still part of the Eid, I don’t have class, which is relaxing…although I still managed to wake up before 6:30.  It’s amazing how quickly this class has gone by, and I can’t wait to take more classes here come fall.  My only disappointment is that I don’t have a way to store food in my room, which means I’ve been eating out basically every night.  However, this did have the consequence that the employees of two different restaurants know me, so that’s not too bad.  Here’s to making that three restaurants! 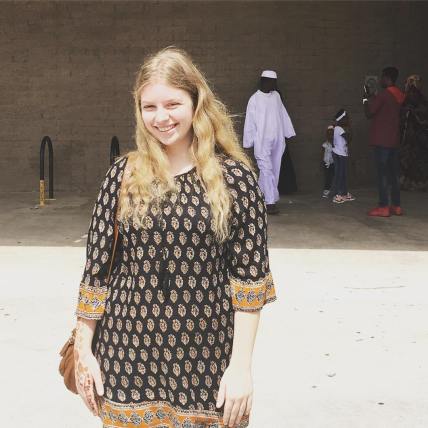 At TCC for Eid

It was hot and we needed ice cream 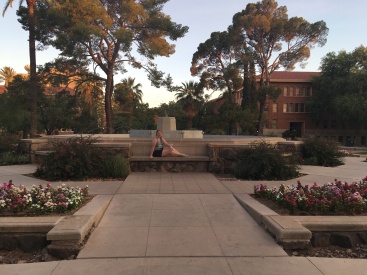 Hanging out on break