My morning began sometime before six a.m. with the sounds of my usually late-sleeping sister rising early and eager to be on the road for her first trip out of the country.  Kayley, of course, is only coming up to Canada to put me on the plane, but it’s still exciting for her especially with the promise of a Great Wolfe Lodge when I return in three weeks.  We crossed the border around three this afternoon and stopped at a Wendy’s where I enjoyed for the first time since April some hot poutine (a Canadian dish of french fries, gravy, and cheese curds).

Now, in the early evening, we’re all exhausted despite doing nothing but sit awake in the car all day.  Kayley has been recently disappointed by the lack of a pool in our hotel though, so we are headed down to the waterfront of Lake Ontario for dinner before we return and go to asleep.  This has been a depressingly boring post since I haven’t done much on my trip today and only covered an important five hundred miles.  Since then we spent about three hours driving through (and getting lost in) Toronto on a quest to find dinner.  I’m now exhausted, so I’ll leave with a few pictures from the road before posting again on Saturday. 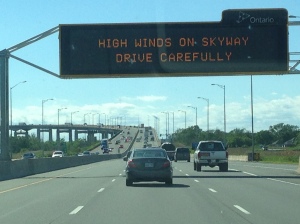 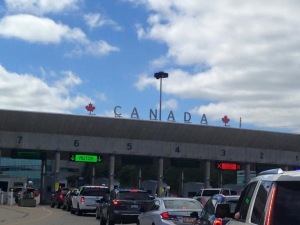